Functional Modelling gives the process perspective of the object-oriented analysis model and an overview of what the system is supposed to do. It defines the function of the internal processes in the system with the aid of Data Flow Diagrams (DFDs). It depicts the functional derivation of the data values without indicating how they are derived when they are computed, or why they need to be computed.

Functional Modelling is represented through a hierarchy of DFDs. The DFD is a graphical representation of a system that shows the inputs to the system, the processing upon the inputs, the outputs of the system as well as the internal data stores. DFDs illustrate the series of transformations or computations performed on the objects or the system, and the external controls and objects that affect the transformation.

Rumbaugh et al. have defined DFD as, “A data flow diagram is a graph which shows the flow of data values from their sources in objects through processes that transform them to their destinations on other objects.”

The four main parts of a DFD are −

The other parts of a DFD are −

Features of a DFD

Representation in DFD − A process is represented as an ellipse with its name written inside it and contains a fixed number of input and output data values.

Data flow represents the flow of data between two processes. It could be between an actor and a process, or between a data store and a process. A data flow denotes the value of a data item at some point of the computation. This value is not changed by the data flow.

Representation in DFD − A data flow is represented by a directed arc or an arrow, labelled with the name of the data item that it carries.

In the above figure, Integer_a and Integer_b represent the input data flows to the process, while L.C.M. and H.C.F. are the output data flows.

A data flow may be forked in the following cases −

Actors are the active objects that interact with the system by either producing data and inputting them to the system, or consuming data produced by the system. In other words, actors serve as the sources and the sinks of data.

Representation in DFD − An actor is represented by a rectangle. Actors are connected to the inputs and outputs and lie on the boundary of the DFD.

Example − The following figure shows the actors, namely, Customer and Sales_Clerk in a counter sales system.

Data stores are the passive objects that act as a repository of data. Unlike actors, they cannot perform any operations. They are used to store data and retrieve the stored data. They represent a data structure, a disk file, or a table in a database.

Example − The following figure shows a data store, Sales_Record, that stores the details of all sales. Input to the data store comprises of details of sales such as item, billing amount, date, etc. To find the average sales, the process retrieves the sales records and computes the average.

Constraints specify the conditions or restrictions that need to be satisfied over time. They allow adding new rules or modifying existing ones. Constraints can appear in all the three models of object-oriented analysis.

Representation − A constraint is rendered as a string within braces.

A process may be associated with a certain Boolean value and is evaluated only if the value is true, though it is not a direct input to the process. These Boolean values are called the control flows.

Representation in DFD − Control flows are represented by a dotted arc from the process producing the Boolean value to the process controlled by them.

Example − The following figure represents a DFD for arithmetic division. The Divisor is tested for non-zero. If it is not zero, the control flow OK has a value True and subsequently the Divide process computes the Quotient and the Remainder. 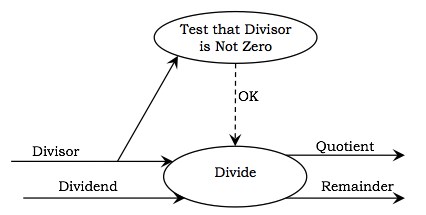 Developing the DFD Model of a System

In order to develop the DFD model of a system, a hierarchy of DFDs are constructed. The top-level DFD comprises of a single process and the actors interacting with it.

At each successive lower level, further details are gradually included. A process is decomposed into sub-processes, the data flows among the sub-processes are identified, the control flows are determined, and the data stores are defined. While decomposing a process, the data flow into or out of the process should match the data flow at the next level of DFD.

Example − Let us consider a software system, Wholesaler Software, that automates the transactions of a wholesale shop. The shop sells in bulks and has a clientele comprising of merchants and retail shop owners. Each customer is asked to register with his/her particulars and is given a unique customer code, C_Code. Once a sale is done, the shop registers its details and sends the goods for dispatch. Each year, the shop distributes Christmas gifts to its customers, which comprise of a silver coin or a gold coin depending upon the total sales and the decision of the proprietor.

The functional model for the Wholesale Software is given below. The figure below shows the top-level DFD. It shows the software as a single process and the actors that interact with it.

The actors in the system are −

In the system, three processes can be identified, which are −

The data stores that will be required are − 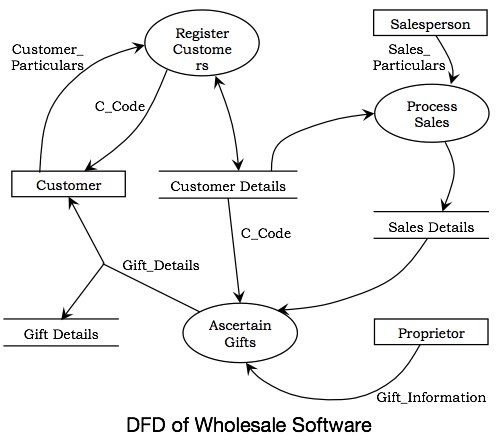 The following figure shows the expansion of the process Ascertain Gifts. It has two processes in it, Find Total Sales and Decide Type of Gift Coin. The Find Total Sales process computes the yearly total sales corresponding to each customer and records the data. Taking this record and the decision of the proprietor as inputs, the gift coins are allotted through Decide Type of Gift Coin process. 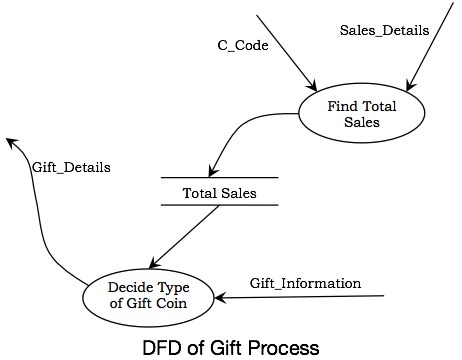 Advantages and Disadvantages of DFD

The Object Model, the Dynamic Model, and the Functional Model are complementary to each other for a complete Object-Oriented Analysis.

The dynamic model shows the status of the objects and the operations performed on the occurrences of events and the subsequent changes in states. The state of the object as a result of the changes is shown in the object model.

I started my Professional Journey in 2006 with one of the Web Development Company in Bangalore and my 1st framework was "Ruby on Rail" as Web development and delivered around 5+ Projects using this platform. Then came another dimension as JEE/Sturst framework, Gradually I realized that I want to build something on my own and give my passion and energy on creating something different a
Explore