The object model visualizes the elements in a software application in terms of objects. In this chapter, we will look into the basic concepts and terminologies of object–oriented systems.

The concepts of objects and classes are intrinsically linked with each other and form the foundation of object–oriented paradigm.

An object is a real-world element in an object–oriented environment that may have a physical or a conceptual existence. Each object has −

A class represents a collection of objects having same characteristic properties that exhibit common behavior. It gives the blueprint or description of the objects that can be created from it. Creation of an object as a member of a class is called instantiation. Thus, object is an instance of a class.

The constituents of a class are −

Let us consider a simple class, Circle, that represents the geometrical figure circle in a two–dimensional space. The attributes of this class can be identified as follows −

Some of its operations can be defined as follows −

During instantiation, values are assigned for at least some of the attributes. If we create an object my_circle, we can assign values like x-coord : 2, y-coord : 3, and a : 4 to depict its state. Now, if the operation scale() is performed on my_circle with a scaling factor of 2, the value of the variable a will become 8. This operation brings a change in the state of my_circle, i.e., the object has exhibited certain behavior.

Encapsulation is the process of binding both attributes and methods together within a class. Through encapsulation, the internal details of a class can be hidden from outside. It permits the elements of the class to be accessed from outside only through the interface provided by the class.

Typically, a class is designed such that its data (attributes) can be accessed only by its class methods and insulated from direct outside access. This process of insulating an object’s data is called data hiding or information hiding.

In the class Circle, data hiding can be incorporated by making attributes invisible from outside the class and adding two more methods to the class for accessing class data, namely −

Here the private data of the object my_circle cannot be accessed directly by any method that is not encapsulated within the class Circle. It should instead be accessed through the methods setValues() and getValues().

Any application requires a number of objects interacting in a harmonious manner. Objects in a system may communicate with each other using message passing. Suppose a system has two objects: obj1 and obj2. The object obj1 sends a message to object obj2, if obj1 wants obj2 to execute one of its methods.

The features of message passing are −

Inheritance is the mechanism that permits new classes to be created out of existing classes by extending and refining its capabilities. The existing classes are called the base classes/parent classes/super-classes, and the new classes are called the derived classes/child classes/subclasses. The subclass can inherit or derive the attributes and methods of the super-class(es) provided that the super-class allows so. Besides, the subclass may add its own attributes and methods and may modify any of the super-class methods. Inheritance defines an “is – a” relationship.

From a class Mammal, a number of classes can be derived such as Human, Cat, Dog, Cow, etc. Humans, cats, dogs, and cows all have the distinct characteristics of mammals. In addition, each has its own particular characteristics. It can be said that a cow “is – a” mammal.

The following figure depicts the examples of different types of inheritance. 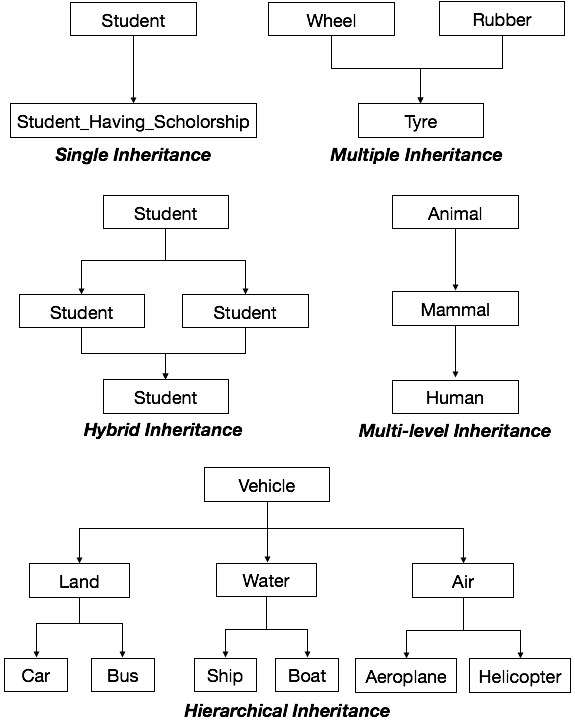 Polymorphism is originally a Greek word that means the ability to take multiple forms. In object-oriented paradigm, polymorphism implies using operations in different ways, depending upon the instance they are operating upon. Polymorphism allows objects with different internal structures to have a common external interface. Polymorphism is particularly effective while implementing inheritance.

Let us consider two classes, Circle and Square, each with a method findArea(). Though the name and purpose of the methods in the classes are same, the internal implementation, i.e., the procedure of calculating area is different for each class. When an object of class Circle invokes its findArea() method, the operation finds the area of the circle without any conflict with the findArea() method of the Square class.

Generalization and specialization represent a hierarchy of relationships between classes, where subclasses inherit from super-classes.

Specialization is the reverse process of generalization. Here, the distinguishing features of groups of objects are used to form specialized classes from existing classes. It can be said that the subclasses are the specialized versions of the super-class.

The following figure shows an example of generalization and specialization.

A link represents a connection through which an object collaborates with other objects. Rumbaugh has defined it as “a physical or conceptual connection between objects”. Through a link, one object may invoke the methods or navigate through another object. A link depicts the relationship between two or more objects.

Association is a group of links having common structure and common behavior. Association depicts the relationship between objects of one or more classes. A link can be defined as an instance of an association.

Degree of an Association

Degree of an association denotes the number of classes involved in a connection. Degree may be unary, binary, or ternary.

Cardinality of a binary association denotes the number of instances participating in an association. There are three types of cardinality ratios, namely −

Aggregation or composition is a relationship among classes by which a class can be made up of any combination of objects of other classes. It allows objects to be placed directly within the body of other classes. Aggregation is referred as a “part–of” or “has–a” relationship, with the ability to navigate from the whole to its parts. An aggregate object is an object that is composed of one or more other objects.

In the relationship, “a car has–a motor”, car is the whole object or the aggregate, and the motor is a “part–of” the car. Aggregation may denote −

Now that we have gone through the core concepts pertaining to object orientation, it would be worthwhile to note the advantages that this model has to offer.

The benefits of using the object model are −

I started my Professional Journey in 2006 with one of the Web Development Company in Bangalore and my 1st framework was "Ruby on Rail" as Web development and delivered around 5+ Projects using this platform. Then came another dimension as JEE/Sturst framework, Gradually I realized that I want to build something on my own and give my passion and energy on creating something different a
Explore